Date:
Direct expressions of interest to: 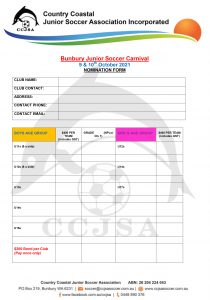 a) The board will comprise three individuals appointed by the carnival organisers that are independent of the team’s party to the dispute.
b) A club representative must contact the registration desk within 1 hour of the conclusion of the game and lodge a dispute in writing with the carnival organiser
c) The decision of the P&D board is final
d) A copy of the P&D board’s decision will be provided to Football West.
e) The P&D board will use the information provided in Appendix 1 as a guide for decision making but is not limited by this information and may choose an alternative penalty depending upon the nature of any offence.

(A) Where points are equal the team with the best goal difference is the winner.

(B) Where goal difference is equal, the team with least goals against is the winner.

(C) Where none of the above provides a clear winner, the teams concerned will have a penalty shootout.

The following offences may also result in elevation to Football West disciplinary process: